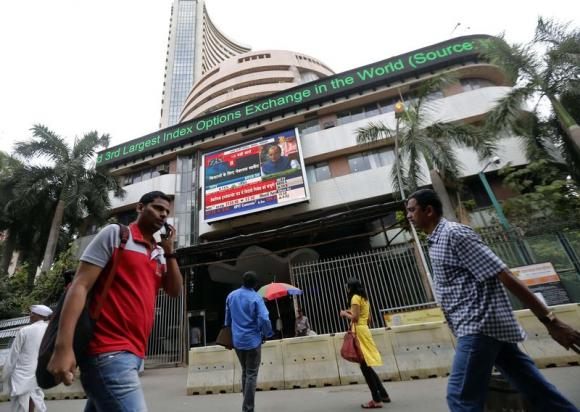 Benchmark indices continue to remain choppy with Sensex and Nifty swinging between negative and positive zone even as metal shares retreat on the back of weak economic forecast from China, the world’s largest consumer of metals.

However, the broader markets are outperforming the benchmark indices- BSE Midcap and Smallcap indices are 0.6-0.7%.

Market breadth is positive with 1,162 gainers and 1,025 losers on the Bombay Stock Exchange.

In the currency front, snapping its four-day falling streak, the rupee today recovered by 5 paise to 62.20 against the US dollar in early trade at the Interbank Foreign Exchange market on back of selling of the American currency by exporters.

Asian stocks slipped on Thursday after Wall Street continued to pull back from record highs ahead of Friday’s closely-watched US jobs data, while the nervous euro languished at an 11-year low prior to the European Central Bank’s policy meeting.

China announced an economic growth target for 2015 of around 7% on Thursday and said it would boost government spending, signalling that the lowest rate of expansion for a quarter of a century is the “new normal” for the world’s No 2 economy.

BSE Healthcare index has surged by almost 2% followed by counters like FMCG, Consumer Durables, Power, Auto and Banks, all gaining between 0.2-1%.

However, BSE Metal, Capital Goods and Realty indices are down 0.2-0.5%. The top gainers on the Sensex are Cipla, Sun Pharma, HUL, Dr Reddy’s Labs, Wipro and Axis Bank, all gaining between 1-2%.

Sun Pharma has extended gains and is up 2% after the company announced that it has reached an agreement with GSK Pharma to acquire the latter’s Opiates business in Australia.

The product portfolio consists of poppy-derived opiate raw materials that are primarily used in the manufacture of analgesics for the treatment of moderate to severe pain.

The notes, issued in Reg-S format will be fungible with the existing 2020 maturity paper. The stock is up over 1%. From the FMCG space, HUL is the top Sensex gainer, up nearly 2%.

FMCG major ITC which had witnessed selling pressure in the previous sessions was trading higher by over 0.5%.

IT majors such as Infosys and TCS were down 0.3% as investors remained cautious ahead of the US jobs data. However, Wipro was up 1%.

These companies generate most of their revenues from exports to the US.

In the telecom pack Bharti Airtel and Idea Cellular were down 1-2% on worries that acquisition of spectrum at higher prices would dent margins going forward.

The telecom spectrum auction got off to an enormous start on Wednesday, the first day, with bids worth Rs 60,000 crore. Hindalco, Tata Steel, ICICI Bank, GAIL and NTPC have slipped between 1-2%.

Among other shares, Pipavav Defence, a private shipyard based in Pipavav Defence in Gujarat has plunged 10% at Rs 69 on the Bombay Stock Exchange as the proceeds of the all-cash deal would go to the promoters and not the company. Shares of commercial vehicles maker SML Isuzu has rallied 12% to Rs 1,121 on NSE after reporting a more than 100% year on year growth in vehicles sales for the month of February 2015.

Shares of Crompton Greaves have risen 3% at Rs 185 on the Bombay Stock Exchange (BSE) after the company announced that it has won three orders from Energy Efficiency Services for the implementation of energy efficiency projects in the country.

Rules of Discussion on Sensex in red; HUL up 2%, metal shares slip