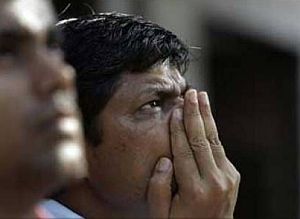 Markets have trimmed gains and are trading in a tight range on account of profit booking at higher levels.

Further, manufacturing activity expanded at its slowest pace in five months in February as a slowdown in new orders dragged overall output, a business survey showed on Monday.

The HSBC Manufacturing Purchasing Managers’ Index, compiled by Markit, fell for the second consecutive month, to 51.2 in February from 52.9 in January.

The main gainers on the Sensex are Axis Bank, L&T, HDFC Bank, Maruti Suzuki and BHEL.

However, shares of ITC has slipped over 3% , extending its previous day’s 8% fall, after the Finance Minister Arun Jaitley proposed raising taxes on cigarettes.

However, selling in index heavyweight IT has capped the upside gains.

Among broader markets, BSE Midcap and Smallcap indices are up nearly 1% each.

Market breadth in BSE is strong with 1,168 advances and 584 declines.

Trading in stock market would also be influenced by investment trend by overseas investors, movement of rupee against the dollar and oil price.

Stock markets would remain close on Friday for Holi. GLOBAL MARKETS Asian stocks got off to a steady start on Monday as soft U.S. data was partially offset by a weekend interest rate cut by China, while the dollar hit a five-week high against the euro.

China’s central bank cut interest rates on Saturday, just days before the annual meeting of the country’s parliament, in the latest effort to support the world’s second-largest economy as its momentum slows.

BSE Bankex and BSE Capital Goods index have surged by 2% each. However, BSE FMCG index has dipped by over 1%.

The top gainers on the Sensex are Axis Bank, L&T, HDFC Bank, BHEL, HDFC and Maruti Suzuki, all surging between 2-3%.

Axis Bank has edged higher after the Budget proposal would favour select private sector lenders who will now be able to raise additional money from foreign institutional investors.

The Budget has given a push to infrastructure and the huge expenditure planned is a welcome move for the sector.

On the losing side, ITC is trading lower by 3% at Rs 350 on NSE, extending its previous day’s 8% fall, after the Finance Minister Arun Jaitley proposed raising taxes on cigarettes.

Shares of airline companies were trading 4-5% lower in early trades after oil marketing companies raised price of aviation turbine fuel by 8.2%, the first such hike since last July.

Jet Airways and SpiceJet are down over 4%. Shares of PSU OMCs are trading higher after the companies announced increase in petrol and diesel prices with effect from midnight of 28 February 2015/1 March 2015. IOC, BPCL, HPCL have gained over 1%.

Rules of Discussion on Markets trim gains; ITC slips over 3%