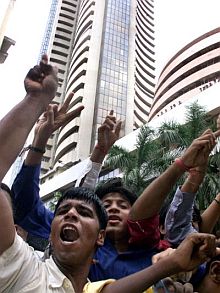 The Sensex is expected to touch 54,000 by end-2018, although it is likely to slide over the next few months as “nothing has changed on the ground yet”, says Bank of America Merrill Lynch (BoFA-ML).

According to the global financial services major, India remains the “most owned” market among the global emerging- market funds by a wide margin as these funds are nearly 420 bps “overweight” on the country.

As per the BoFA-ML survey held during March 9-12, wherein 50 investors participated, 56 per cent of the investors were overweight on India and only 7 per cent were underweight.

India at 43 per cent was the most favourite equity market for the investors for 2015, followed by China at 26 per cent and Japan at 23 per cent respectively. Notwithstanding the bullishness, the global brokerage firm said, in the near term the pace of economic recovery as well as earnings recovery is likely to disappoint investors in India.

The survey noted that a common refrain from companies was that “nothing has really changed on the ground” in the 10 months post-election and the valuations are probably pricing in too much of good news.

“While we are structural bulls on India with an index target of 54,000 by end-2018, we have been highlighting that we see the market being range-bound to negative over next few months,” the report said.

Sector-wise, banking is expected to be the best performing sector with 34 per cent investors picking the sector.

On the other hand, commodities and Autos are least likely to be the best performing sectors this year, as per the investors.

Majority of the investors in the survey (58 per cent) expect the Indian rupee to be in the range of Rs 60-65/USD.

Around 38 per cent investors expect Rs to cross Rs 65/USD in 2015. The rupee strengthened by three paise to 62.67 against the US dollar at the Interbank Foreign Exchange in early trade today.