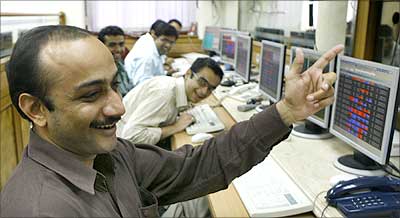 The broader markets are outperforming the benchmark indices- BSE Midcap and Smallcap indices are up 0.7-1%. Market breadth is strong with 1,313 gainers and 613 losers on the BSE.

Dollar demand by corporates ahead of the Budget also weighed on the rupee.

On the sectoral front, BSE Capital Goods index has surged nearly 2% followed by counters like Banks, Auto, Consumer Durables, Power, Healthcare and IT, all gaining by 1% each.

Infact, all the sectoral indices are trading in positive zone. L&T is the top Sensex gainer, up 2.5%.

The Ministry of Defence (MoD) has selected two consortia from the dozen companies invited to bid in November 2013. One is a consortium between Larsen & Toubro (L&T) and Tata Power, and the other between Rolta and Bharat Electronics Ltd (BEL).

These winners – termed development agencies – could be announced any day. Among banks, ICICI Bank, Axis Bank, SBI have gained 2-3%.

Other notable gainers are TCS, Dr Reddy’s Labs, Maruti Suzuki and NTPC.\ On the losing side, Bharti Airtel, Sesa Sterlite, ONGC, BHEL and Tata Motors have slipped between 1-2%.

Among other shares, Reliance Communications is trading higher by 2% to Rs 70 on the BSE after it joined hands with Facebook Inc to provide free access to 33 websites in order to garner a wider audience and customer base.

The initiative aims to encourage more people to use the Internet.

Shares of United Bank of India (UBI) are trading higher by 2.4% to Rs 38 on the BSE after it earned a net profit of Rs 42 crore in the October-December quarter, compared to a net loss of Rs 1,238 crore in the corresponding period of last year.

Essar Group firm AGC Networks has risen over 3% at Rs 89 on the BSE after reporting a net loss of Rs 3.55 crore for the third quarter ended December 31, 2014 compared to loss of Rs 89.63crore in the same quarter last year.