BSE Bankex was the top sectoral loser down 2.3% 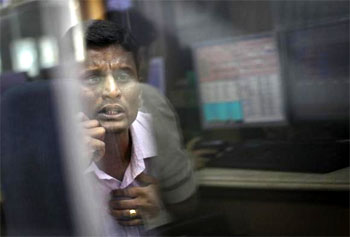 Markets continued to exhibit a weak trend in late noon trades on Friday with the benchmark Nifty set to snap its ten-day winning streak as investors turned cautious and booked profits at higher levels.

The partially convertible rupee is trading flat at 61.88 compared with the previous close of 61.86 to the US dollar. Meanwhile, the rupee is likely to remain under pressure amid month-end dollar demand from importers.

On the global front, Asian shares edged up on Friday, talking heart from a late earnings-led surge on Wall Street even as continuing concerns about global growth tempered gains. Japan’s benchmark Nikkei was down 0.4%, while Straits Times was trading unchanged. Hang Seng was down 0.4% while Chinese shares continued to remain under pressure with Shanghai Composite down 1.6%.

Financial shares witnessed selling pressure on the back of PSU banking major Bank of Baroda’s disappointing third quarter earnings. SBI and PNB were down 4-5% each. Bank of Baroda slumped 10% after reporting a sharp 68% year on year (yoy) drop in net profit at Rs 334 crore for the third quarter ended December 31, 2014 (Q3), due to higher provisions for stressed loans and tax provisions.

HDFC was down nearly 4% post its earnings. The mortgage lender posted a 12 per cent rise in net profit for the third quarter of FY15 at Rs 1,425 crore on the back of higher loan growth.

Coal India was down nearly 4% after the government’s offer for sale (OFS) opened for subscription on Friday. The floor price — the base price at which it intends to sell its 10 per cent stake in Coal India — has been set at Rs 358 a share, translating into a 4.5% discount to Thursday’s closing price.

Dr Reddys Lab declined over 3% after reporting a 7.1% decline in consolidated net profit to Rs 574.5 crore for the quarter ended December on the back of higher operational costs and subdued revenue growth particularly in the most profitable US market.

Bharti Airtel recovered from its day’s lows and was trading marginally lower. Airtel M Commerce Services Ltd (AMSL), a wholly owned subsidiary of the country’s largest telecom service provider Bharti Airtel, said on Thursday that it would apply to the Reserve Bank of India (RBI) for a licence and Kotak Mahindra Bank will acquire 19.90 per cent stake in it. Currently, AMSL offers mobile money services under the brand name Airtel Money.

Shares of ICICI Bank are trading nearly 5% post announcement of its Q3 results. HDFC Bank was down 1.5%.

NTPC is the top Sensex gainer, up over 2.2%. The company has restricted the building of three new solar power projects to domestic manufacturers, even as India pushes for overseas companies to lead fresh investments into a renewable energy drive. Also, the company is due to release its Q3 results later during the day.

BHEL has gained 2.3%. The company has announced commissioning of 600 MW thermal power project in Odisha.

While there were little concrete announcements, specifics including civil nuclear liability and insurance pool in the defence and nuclear industries, and extension of defence manufacturing collaborations are likely to boost plans for companies such as Larsen & Toubro (L&T) and Tata Power among others. Tata Power was up 1.9% while L&T was down 0.5%.

Shares of real estate companies are in demand and trading higher by up to 10% on the bourses in otherwise subdued market.

In the broader market, the BSE Mid-cap and Small-cap indices were down 0.1% each.